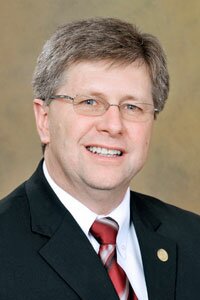 Tom Casperson served in the Michigan House of Representatives for six years, from 2002 to 2008. In 2010, he was elected to the Michigan Senate, and was re-elected for a second term in 2014.

Prior to being elected to the legislature, Casperson worked for 27 years in his family’s log trucking business, including 12 years as its owner and operator. That business, Casperson & Son Trucking, was started by his grandfather.

While serving as a State Representative, Casperson authored twenty Public Acts, including: the “Crib Truck Bill” (Public Act 142 of 2003), which addressed the cause of a fatal log spill accident, a tragedy that led to Casperson’s first run for elected office; the “Healthy Forest Package” (Public Act 125 of 2004), a group of bills requiring the Department of Natural Resources to certify Michigan’s forests as sustainable forests; Public Act 449 of 2004, legislation that permitted metallic mining in Michigan; “The Castle Doctrine” (Public Act 313 of 2006), an Act that gives Michigan citizens the right to use force to defend themselves and provides law-abiding citizens with civil immunity; and Public Act 332 of 2005, legislation that prevented the State from seizing control of the Mackinac Bridge.

Since taking office as a state senator, Casperson has introduced a wide variety of bills, with 25 of those bills signed into law during his first term in the Senate, including: the transformative Land Cap, which provides restrictions on land that the Michigan Department of Natural Resources can purchase (Public Act 240 of 2012); a law to ensure the state fulfills its obligation to pay local units of government payments in lieu of taxes on the basis of the state’s land ownership (Public Act 603 of 2012); a law that removes restrictions to permit property owners with frontage on the Great Lakes, to groom their beaches (Public Act 247 of 2012); a law to grant the Michigan Natural Resource Commission the authority to establish a wolf hunt season (Public Act 520 of 2012); and historic legislation to establish a Regional Transit Authority (Public Act 387 of 2012).

Casperson and his wife Diane, whom he married in 1982, continue to reside in Escanaba with two of their four children: Hillary and Dane. Their son Tom is a recent graduate of the engineering program at Western Michigan University, while their daughter Ashley lives in San Diego with her husband, Chan, who serves in the U.S. Navy, and their daughter, Oaklyn.

Senator Tom Casperson can be contacted by clicking here.

Loans Near Me in Michigan on NearMePayday.Loan